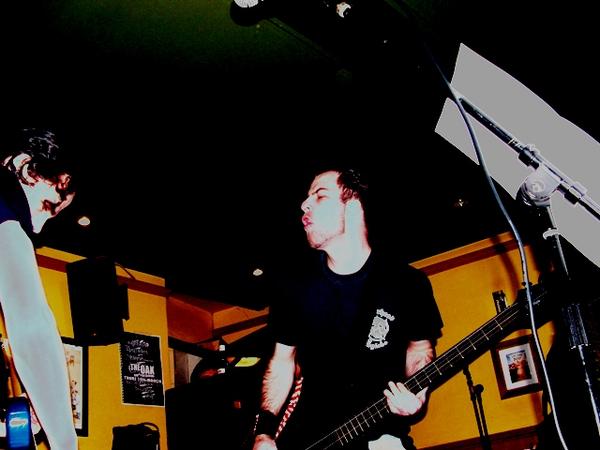 Lynyrd Skynard, Tuesday’s Gone. It was the song that flicked the switch and sparked a true interest in music for Machina Kore bassist Finney. What followed was a landslide of music from bands and solo artists far and wide. Playlists would have included Pearl Jam, Motorhead, Kyuss, Clutch, James Taylor, Appleseed Cast and Metallica. Starting out at age 15 his first choice of musical instrument was an easy decision. It was simple, he wanted to be Cliff Burton. Fully armed with an Encore bass and a 15 watt amp he was ready to compete with the master and his majestic red Rickenbacker.

After a lot of lost bass picks and a few school bands Finney met long time friend and guitarist Robert Edgar who can now be found fronting Manchester based band Son Primo. Together they formed Phoenix Dawn in the Summer of 2000. After recruiting ex Bulbs drummer Kevin Neeson in 2001 the band were frequent attendees on the music circuit in Northern Ireland.  The departure of drummer Neeson in 2003 led Finney and Edgar to dissolve the band and start afresh as a three piece with original Sinocence drummer Fergal McGeown. Now named Kelwan the band ramped up their gigging efforts supporting acts such as Sinocence, Million Dollar Reload,Triggerman, Mojo Fury and Tilted. After recording two EP’s at Einstein Studios “Pillars of Creation” and “Somethings Happen Sometimes“, early 2009 saw the amicable split of the band due to personal reasons.

After this Finney became somewhat of a musical nomad, staying away from bands and preferring to concentrate on personal projects. 2020 saw him decide to end his musical hiatus from the band scene and jump back into the fire with Machina Kore.